Stopping a cab in middle of Soho and jumping in, we were quickly passing through London’s west-end, passing Buckingham Palace and the Houses of Parliament when Shelley noticed the cabbie having a bit of a sing-song to himself in the front of his cab. 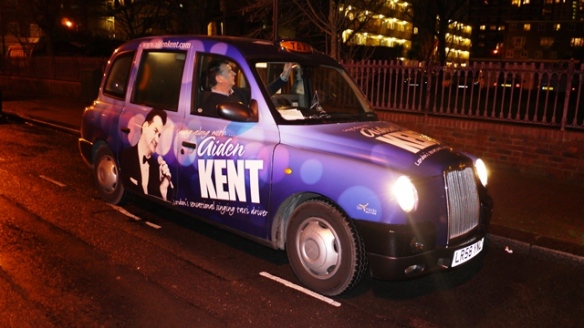 Aiden Kent (all over his cab!)

He then offered to serenade us with (I think) a Frank Sinatra song – not being too sure what to expect we said go for it though if it was awful, we were not going to pay and that he’d have to pay us! With some big band music playing in the background he started singing and was excellent – at the traffic lights other cars and their  passengers would be looking in wondering what the hell was going on – the cabbie crooning with us clapping along in the back!

After the song, we got chatting and he told us that as well as being a cabbie he also sings in a band/on his own at weddings, bars and clubs, he was such a nice guy and it really made our night.

It was without doubt, the best black-cab ride I’ve had home!