Earlier during the summer, I was lucky enough to be able to purchase my own house and finally, after several false starts, work finally begun on the renovation and I’m really happy that progress is starting to happen – up until very recently I’d been living in Brockley SE4, in a lovely Victorian terraced house with loads of original features including lovely stained glass windows and more importantly, a couple of decent pubs on my doorstep.

For various reasons I had to reluctantly had to sell the house and move on. Being unsure of what to do next and with house prices going through the roof I was pretty sure I’d end up living in small two bed flat somewhere in South East London – since coming to London I’ve lived pretty much everywhere: NW6, NW10, , W9, W10, SW9, SE5, SE15, SE4 and now SE13 <- unless you live in London, none of these will make any sense to you though all the S’s are South of the River!

I’m not a native Londoner though my pretty much grew up in Peckham before my parent left London during the mid-70’s to move to a new town outside of London called Milton Keynes. At the time we were living on a major housing estate in Bermondsey called the Bonamee(?) which was condemned with all the council tenants – we left for Milton Keynes sometime during the mid 70s.

Growing up in Milton Keynes was quite interesting – being a young kid from inner-city London and moving to what at the time was proper countryside was eye-opening though as I grew older and more ‘sophisticated’ in my outlook, quickly realised how much of a shithole Milton Keynes is and at the earliest opportunity (leaving School at 16) I joined the military vowing to never go back!

Ten years quickly followed and rather than return to MK opted to come to London which is where I’ve been ever since and i’ll no doubt be here for another ten years before moving somewhere else – either near the coast or near one our fantastic national parks.

Like most people coming to London, I started in the north before gravitating south quickly to where a lot of my mum’s family were/are based, back to Peckham/Camberwell and the surrounding areas. Someone once told me that everyone comes south at some point, maybe it’s the less busy roads, the nicer parks of the fact that south of the river tends to be more the ‘real London’, it certainly feels that way to me – north London is too transient, too many people passing through whereas in the South everyone’s been there for years – in each of the places I’ve lived you’d have pensioners living next door who by and large had been born in the house!

The house I’ve bought, was purchased from a lovely old lady called Bessie, she’d been there for fifty years and was selling up to be near her daughters and grandchildren near Hastings. The house is located in an area I hadn’t really noticed previously, it being Hither Green in Lewisham (SE13) and only about a mile from my last place in Brockley – I do love that about London, new areas to discover most of which are on your doorstep.

It’s a standard two up, two down that needs a full refurb – little had been done to the place in the last fifty years and it’s quite a big project for me (more for my team of builders!) and I’m quite excited that finally after a couple of months of pondering, worrying and planning, work has finally begun. 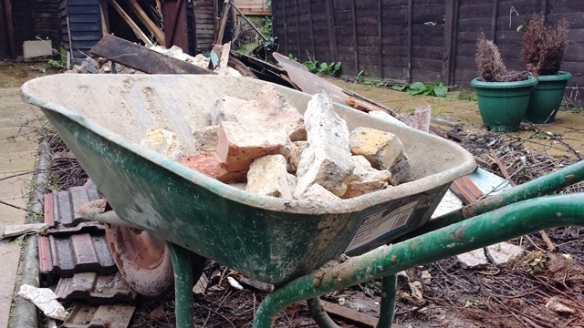