Being thoroughly enthused by the Tour de France I’ve been jumping on my bike at every opportunity and heading out on fairly decent bike rides – mostly exploring London, taking in the sights – something I usually miss whilst commuting and having found myself with a few days to spare I decided to load up the bike and head off. My plan being to follow the river east riding the Thames Path, out towards the Dartford Crossing with my aim being to find somewhere to wild camp at the far end. 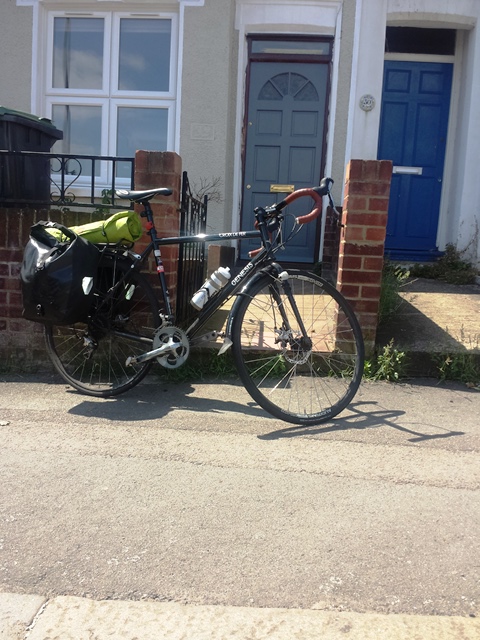 Travelling light – I was carrying 2 litres of water, a jungle bivvy, roll mat and sleeping bag I set off mid-afternoon from Lewisham in SE London and was very quickly at my start point – the Trafalgar Public House, right on the River Thames in Greenwich where I grabbed a photo of my bike next Nelson who was looking north across the river at Canary Wharf.

I do love this ride out of London and its interesting seeing the contrast between north and south – on the north side is Canary Wharf and south is mainly derelict buildings, ship breaking yards and large aggregate industries.

Before long, the O2 Centre came into view…

The whole area is being redeveloped, certainly all round the O2 Centre, its one big building site. After a short while the Thames Barrier came into view. The Thames Barrier became operational in 1982 – I do like to see this structure as my father who sadly died earlier this year fitted the lightning protection to it and I remember the stories he use to tell me all those years ago.

I couldn’t resist this next photo, a well placed bike against a nice piece of graff – almost looks like the guy is about to jump on the bike…

I carried on riding, heading further east before stopping in Erith for refreshments. Having loaded up at the local supermarket my thoughts started turning to where I might sleep tonight. Looking at the map on my phone I spotted a couple of likely stops over near Bexley Village. Leaving Erith I rode along several trails, chatted to some fisherman all of whom were having quite a good day. I also stopped to eat some blackberries! Before too long, I was peddling through the village of Bexley heading towards the spot I’d found – on arrival I was very impressed, it was a great little spot so set up camp and settled in for the night.

I had a great ride and night out under the stars though next time I’ll remember to bring my mosquito repellent!!

3 thoughts on “Cycling Trip with Camping”